Short Summary
911 is called about a armed robbery that just occurred.
Caller gives the names and description of the 2 guys that robbed him and where they currently are.
Police (x3 different LEO) arrive and find 2 suspects fitting the description.
As they go to pat them down one of the suspect runs, arms reaching for his waistband.
Police shoot him and bring him down. Suspect had a gun in his shorts.
---

It all happens so fast.
Good shot? Bad shot?
I have not read all of the article yet but it does appear the suspect shot was the guy who robbed the caller.

It appears that that shoot will be difficult to defend.

I'm no lawyer or nothing, but in my ignorance, I'd say that this is a pretty easy call for a good shoot.

Now I know why they call him SPAZZ.

I'm no lawyer or nothing, but in my ignorance, I'd say that this is a pretty easy call for a good shoot.
Click to expand...

Fleeing felon rule stopped being a thing in the mid 80s. By the mid 90s most of the police jurisdictions had stopped training on it.

What actual evidence was there that the suspect posed an imminent threat?

The Merit Board (or whatever they have there) will probably avoid firing the guy; the grand jury will not indict. But the civil settlement will be significant.

I'm no lawyer or nothing, but in my ignorance, I'd say that this is a pretty easy call for a good shoot.
Click to expand...

IF the suspect is black and the officer is white, I guarantee its a bad shoot because the cop is a racist. He didnt do nuffin. At least thats what the MSM tells me. 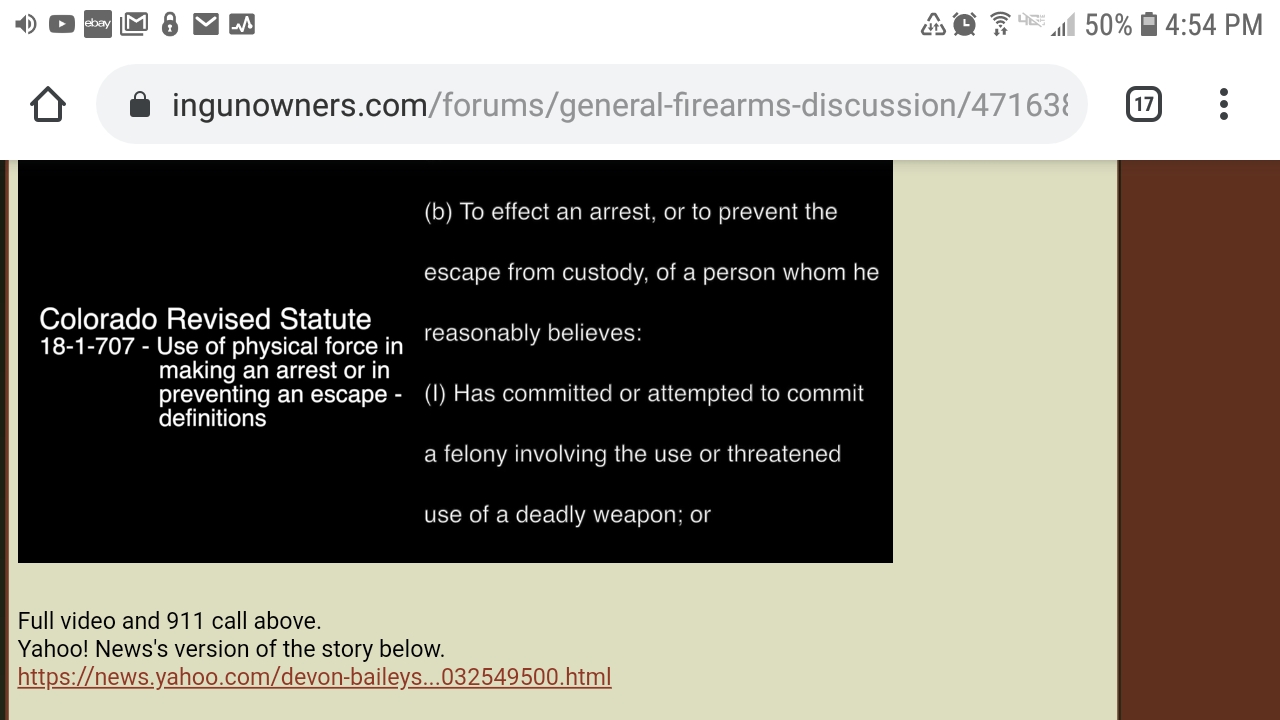 I don't see this going to civil court after the officer is exonerated.

He reasonably believed he committed a felony involving the use of a deadly weapon, and shot him to effect an arrest.

I don't know Colorado law, but let's pretend it's Indiana:

(1) has probable cause to believe that that deadly force is necessary:

(A) to prevent the commission of a forcible felony; or

(B) to effect an arrest of a person who the officer has probable cause to believe poses a threat of serious bodily injury to the officer or a third person; and

(2) has given a warning, if feasible, to the person against whom the deadly force is to be used.

(c) A law enforcement officer making an arrest under an invalid warrant is justified in using force as if the warrant was valid, unless the officer knows that the warrant is invalid.

(2) has given a warning, if feasible, to the person against whom the deadly force is to be used.
Click to expand...

Shooting someone who is fleeing may still be legal depending on the circumstances.

But in this case, probably not a good shoot in Indiana, but good in Colorado.

No, probably good in Indiana, depending on the definition of poses a threat. Right now he's running, but later he could pose a threat. Or he's a threat because you suspect he's armed and could reach for his gun.

That's tough, looks like he was trying to hold his shorts up as a gun In gym shorts was probably pulling them down. Him not wanting to get caught with a gun and running makes a lot more sense than him running and trying to pull a gun on the cops.

Sigblitz said:
Or he's a threat because you suspect he's armed and could reach for his gun.
Click to expand...

Why does this statement remind me of the sandwich shop.

So in Indiana, we give the criminals a head start.

Sigblitz said:
So in Indiana, we give the criminals a head start.
Click to expand...

The video by itself looks bad. But the information known to the officers in this situation is key. They were told there was an armed robbery and the suspects were known to the victim. They knew their names, descriptions, and that they were still in the area. They also had a specific description of at least one gun which had been seen by the victim. The deceased pat checks his waist a couple times, which is consistent with an armed person. He glances around several times when he’s told he’s going to be patted for weapons, as if looking to run. As he runs, he’s seen reaching toward his waist. Whether that’s to keep the gun from falling out or to retrieve it, we will never know. Given the totality of the circumstances, I think the officers will be in the clear. But, I wouldn’t want to be in their shoes.
L

If I were on a jury for judgement of the officers actions I would recommend a commendation! If I behaved just as the felon did I would expect to be shot. We have 1. An identified man that has been accused of a felony assault and robbery with a firearm, disregarding officers orders, running away, but reaching into his shorts. 2. A good possibility that he is attempting to reach a firearm and turn and shoot. NO Officer should have to put their life in jeopardy in a situation like this.

I hate to see anyone shot. That being said I couldn't fault the officers in this. After the suspect started running the officers commanded him multiple times to raise his hands. Hands went to the waist.
A gun was known to have been in the initial crime. Bad luck all around I guess.

Likely a "good" shoot. Having said that, I'm genuinely torn here because I had the EXACT same scenario on one of my runs. I was dispatched to a mall store by robbery victim. 2 suspects that had robbed at an earlier date and he spotted them in this store. I get there first and stop the 2 walking towards the exit into the mall area. They were armed with handguns when the victim was robbed. I don't remember if it was earlier that day or previous day. I was still waiting on my back-up so I was alone with the 2. One bolted into the mall and I gave chase. AS he was running, he was holding up the front of his shorts. By the way he was holding them, I knew he was carrying, so I was running behind him with my hand on my pistol (I don't run with my pistol in my hand). I was just waiting for him to stop or turn around, forcing me to shoot him. As I was following him, I was trying to keep the surroundings in my mind so when that elbow holding the gun started moving up (indicating he was drawing the handgun) I could find cover and engage him. He ran out into the parking lot and ducked down between cars. Gun out, I stopping running and opened my ears. Then I hear it, the distinct sound of a gun dropping to the ground and scooting along the blacktop. He popped up and ran back inside. I stood by the car where the pistol was under and responding officers found him hiding in the mall inside a camera booth. Would I have been justified for dropping him right in the mall? Probably But I was looking for ONE more indication that I was in imminent danger, the elbow raised to the sky to indicate a handgun draw from concealment, before I made the deadly force decision. Was I right? I was unharmed, shoppers were unharmed, and the bad guy went to jail, so I guess I was correct. So, as far as Graham v. Connor, this incident will likely be legal. However, I'm starting to believe that in the future, the lethal bar will be raised above Graham v. Connor. While not necessarily this specific incident, LE around the country are becoming quicker and quicker to the gun and like always, we are becoming our own worst enemies. Eventually, we will force legislative and judicial hands to more narrowly restrict lethal force. Just my .02

Well, apparently in Colorado, he could have been running with his hands up and still stopped with deadly force to affect the arrest, because he is believed to have committed a felony involving the use of a deadly weapon. Assuming that screen grab is current Colorado code. I would say Indiana's law allows due process instead of getting shot on the side of the road. Another example of good laws for the people with a focus on right and wrong, instead of an us and them law with the focus on affecting the arrest of a suspect to the point of having him shot in the back on the side of the road. Sure, they got him, but at the cost of due process of a more civilized society that we enjoy here.
You must log in or register to reply here.
Share:
Facebook Twitter Reddit Pinterest Tumblr WhatsApp Email Share Link