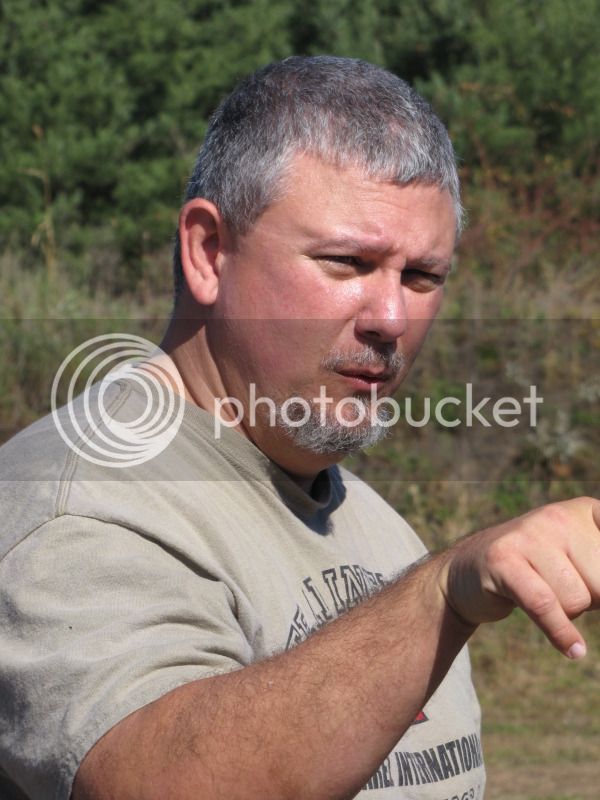 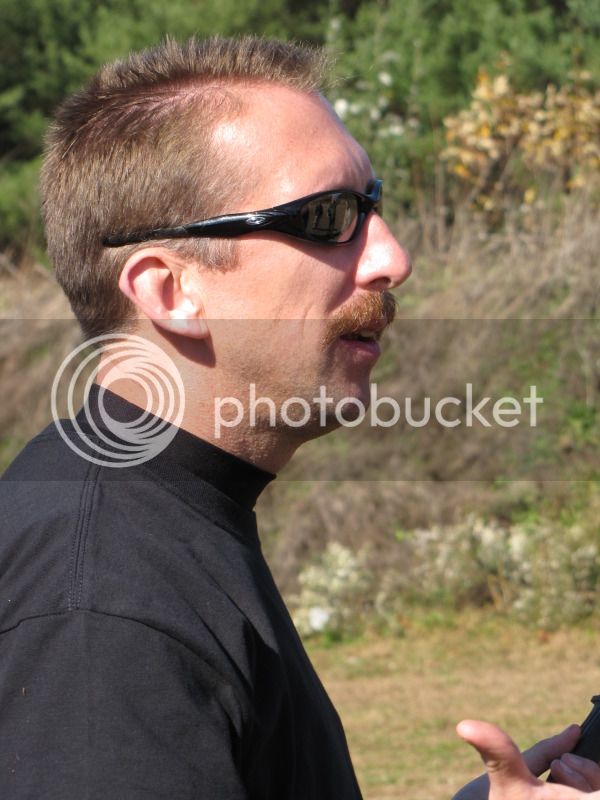 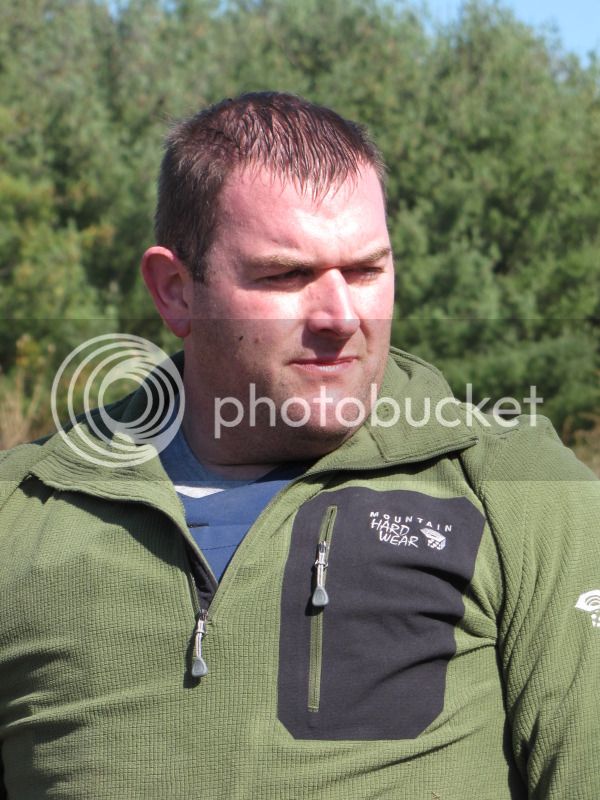 Students:
One from Michigan
Two from Indiana
Ages 27-53

Why:
My training goals for 2012 included both force-on-force and combatives classes. So an opportunity like this was right up my alley. After having been exposed to many firearms classes I wanted to "bridge the gap" and work on intermediate skills like empty hand work.


​
***AAR disclaimer*** In an attempt to leave the integrity of the course material intact, this AAR will cover my own personal experience and will only cover general concepts covered in the course. If you find this information interesting I strongly encourage each and every person to seek out training on their own. Please keep in mind that some of the pictures below only represent a frozen moment of time during dynamic demonstrations and testing. As such, they cannot always accurately represent a specific technique to the reader. I'd be glad to answer any picture-specific questions one has, but please refrain from posting any opinions that are based on assumptions about such pictures.

I took this course in conjunction with Suarez International's (SI) Low Light Gunfighting. They were staggered together on the same weekend which made for what seemed like continuous training. You can view that AAR here: https://www.indianagunowners.com/fo...low_light_gunfighting_10_19_20_2012_pics.html

After a full night of shooting on Friday I got back to the hotel and in bed around 1:30am. At 8am I was right back up and getting ready for Fundamentals of H2H Combatives.

Class started promptly at 10am. It was still cold at the time so we took some shelter in the range barn to kick things off. 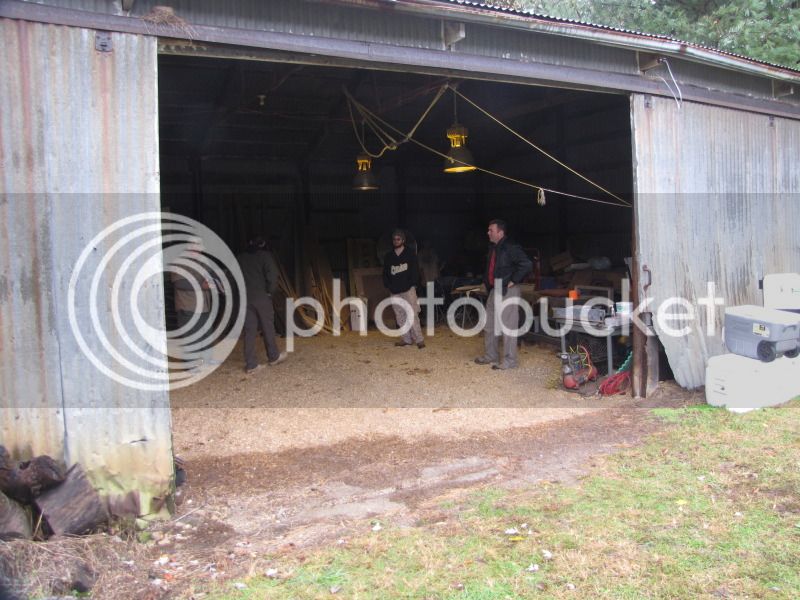 We started with Lead Instructor Randy Harris (Randy Harris) again introducing himself and giving each student a chance to tell a bit about their own training background. One student had zero combatives background, one had just a few basic courses under his belt, and one had a background in fencing. 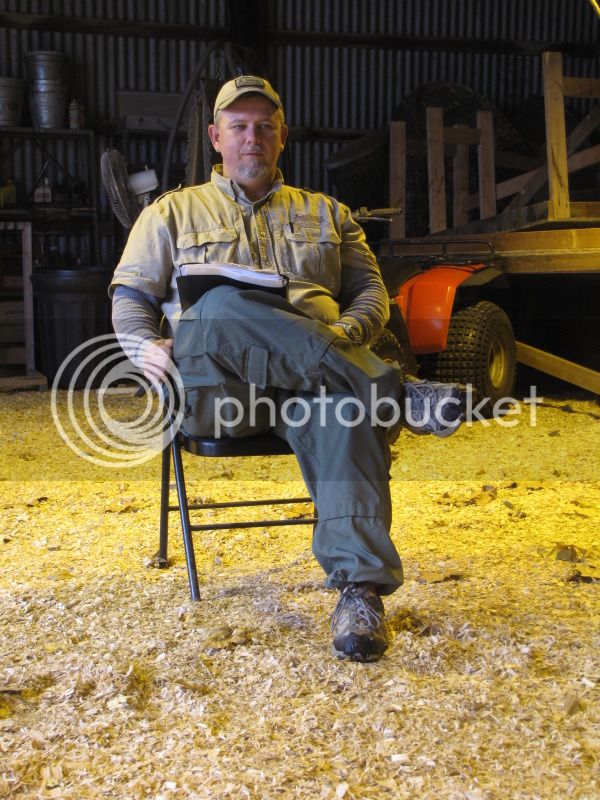 We were lead through a few exercises that quickly showed how reaction time was greatly increased each time we took a single step backwards from our partner. The further away we were, the more we telegraphed and gave away our intentions. Distance can be your friend. 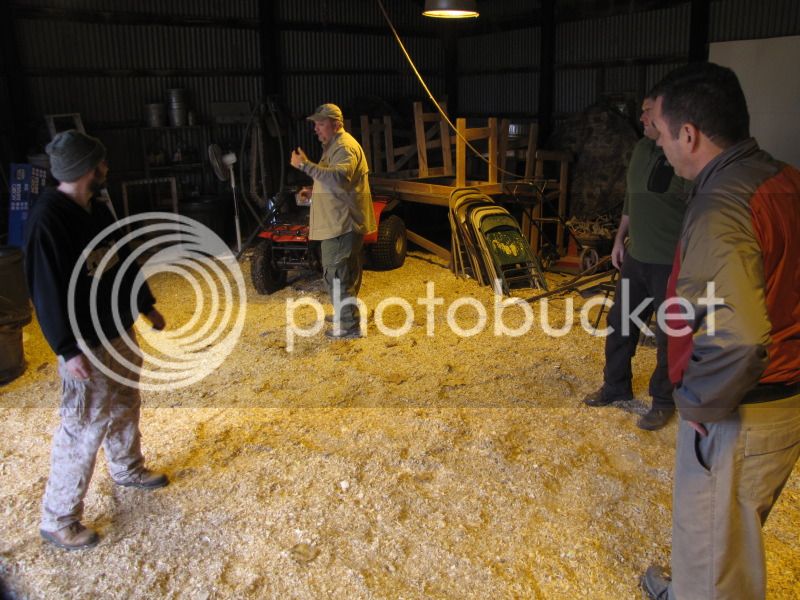 As it started to warm up we moved outside the barn and worked on a few helpful techniques.

We started off talking about the "fence". We discussed what a "fence" will tell us about our potential aggressor, and how to best employ it. This became our base for everything else.

One technique we tried was the "spear and helmet". This was a blocking technique that involved covering the important parts of our heads while still retaining the ability to plow into (and over) and aggressor in an effort to break contact.

Working preemptively we looked at "the cowcatcher" and how it can be used to disrupt an aggressor's OODA loop.

A minor and often overlooked technique we covered was the basic eye jab. While this certainly isn't a fight-ender, it can be used together with other strikes to disorient an aggressor or to gain a positional advantage. 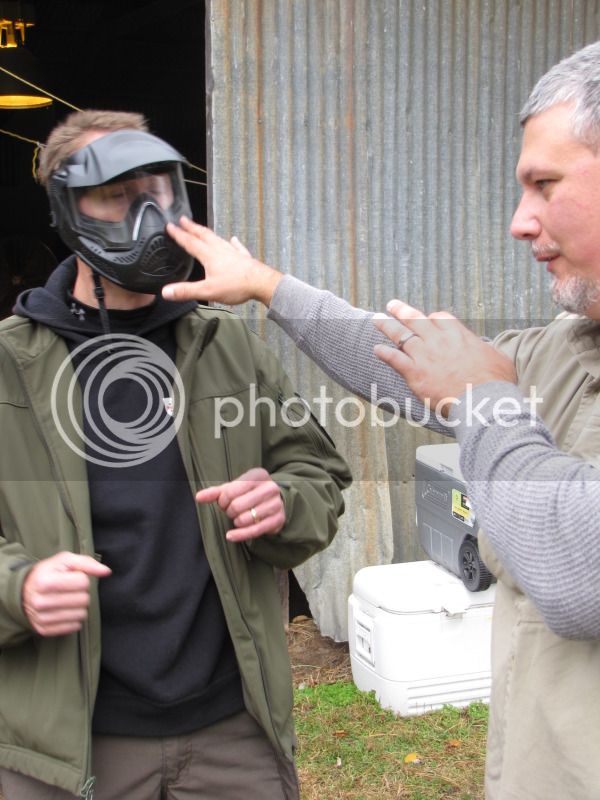 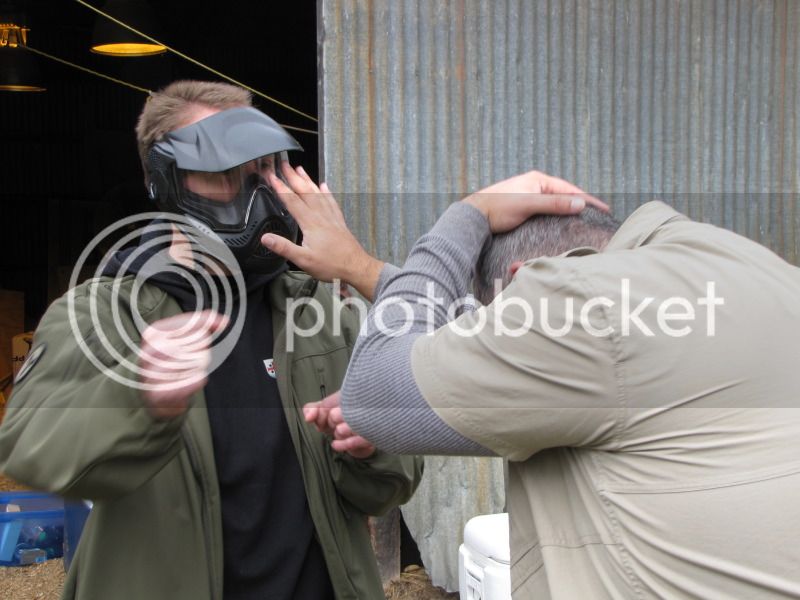 ) Getting hit in the leg hurts much worse when your arms are raised. Weird huh?

Working on strikes we started with the palm strike. Not a punch with a balled up fist, and not a slap with open fingers, but a strike with the meaty part of your palm. 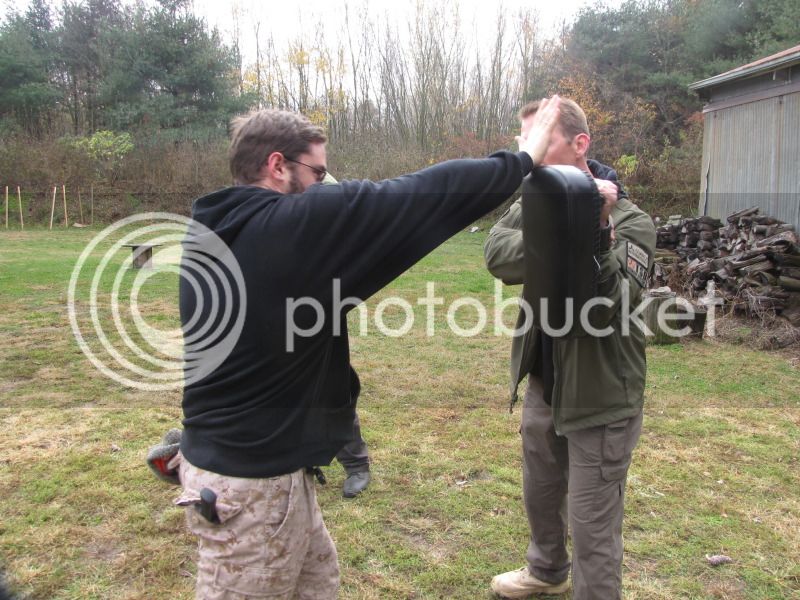 Moving back to the main range we got into strikes with the knees and elbows. These strong muscles and big bones are great for delivering devastating blows without jacking up your wrists or ankles. 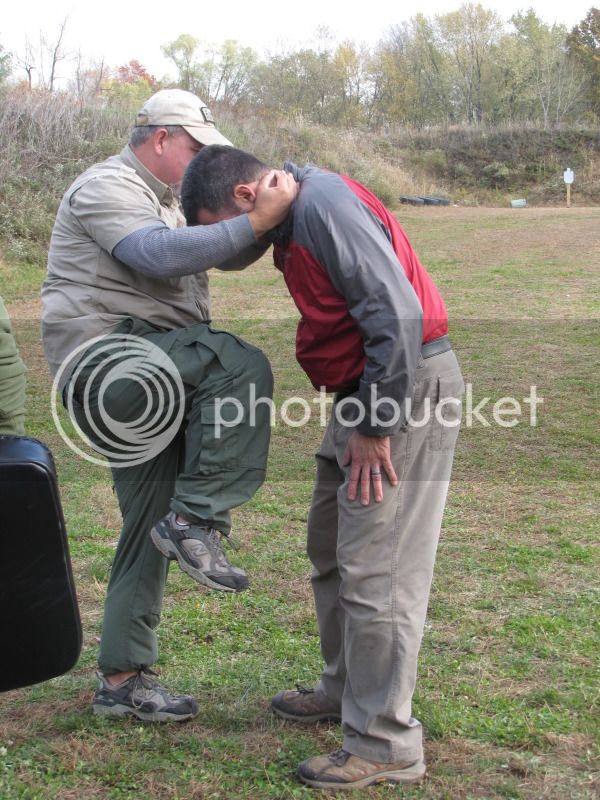 Here is what I like best about SI's fighting philosophy-- it's simple. Caveman simple. The techniques we learned were few and they didn't require years of learning a martial "system". They aren't designed for sport fighting or sparring, or for use against an opponent trained in the same form. They are designed with the end goal in mind of breaking contact and either A) evading/escaping, or B) accessing weapons and dealing with the the situation from a position of power. That's it. Nothing fancy.

With Day 1 at a close we all headed to grab lunch at a local hole-in-the-wall called "The Dugout". We were quickly identified as "non-locals" and were told to "put your pinkies down, this is The Dugout!". Apparently anything above tap water is 'fancy'.

So we enjoyed our tap water and some really great breaded tenderloins. They were hand-breaded and HUGE. At $6.25 I thought it was a steal of a deal. 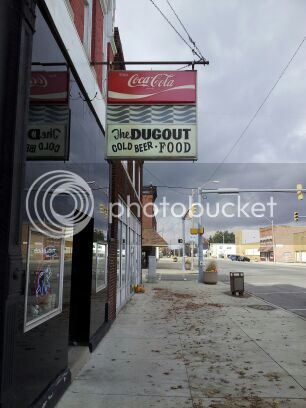 Day 2 was conducted entirely on the range. With the basics of the fence a few strikes under our belts we moved on to positional issues and techniques designed to put us in a superior position. Again it was more 'caveman simple' material.

Knowing that being beside or behind an aggressor is preferable to being in front of him we worked on ways to get to one's side. 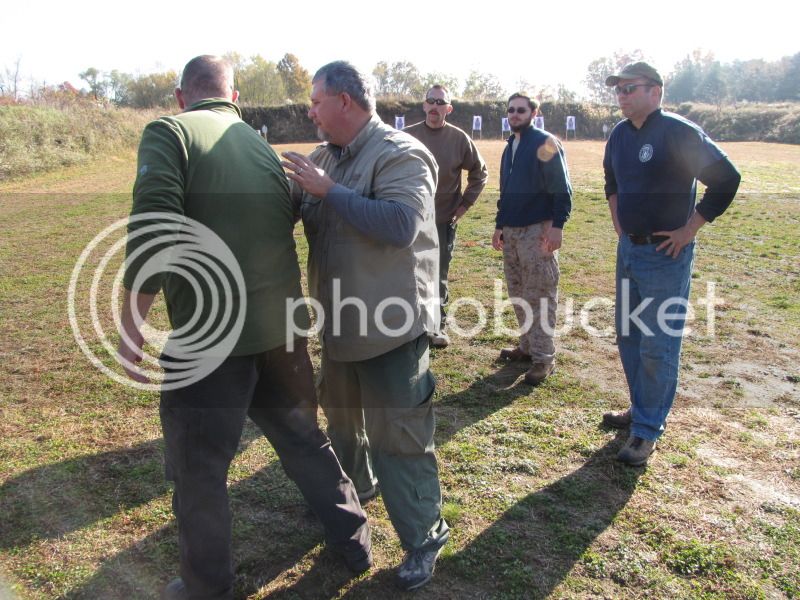 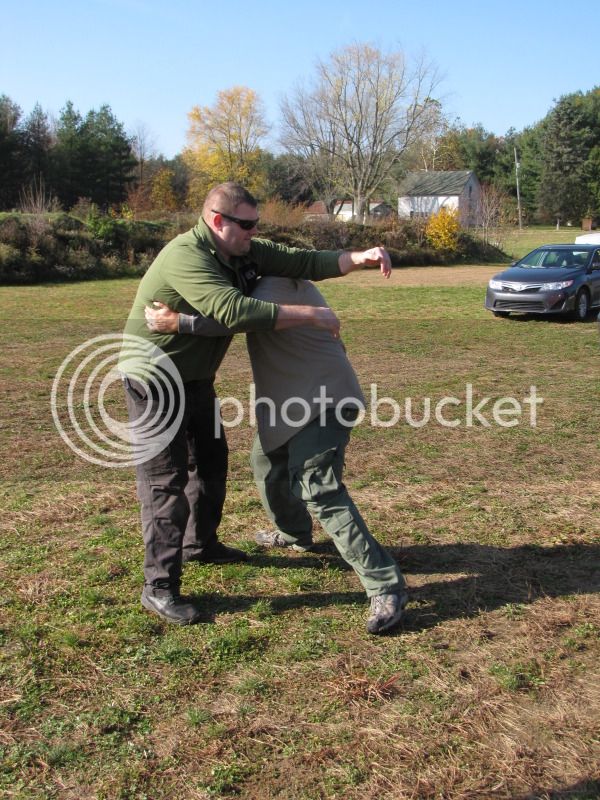 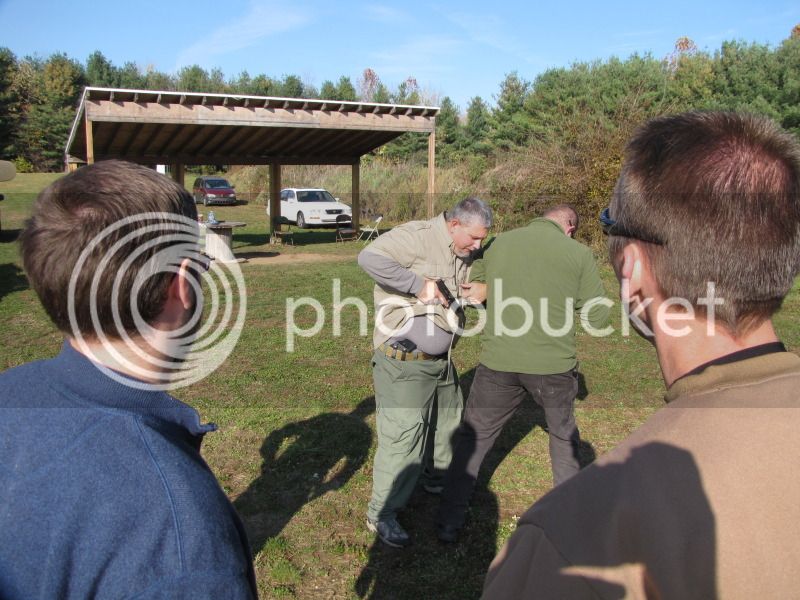 We also looked at defending against the common tackle-- how to avoid it, or how to deal with it if you can't. 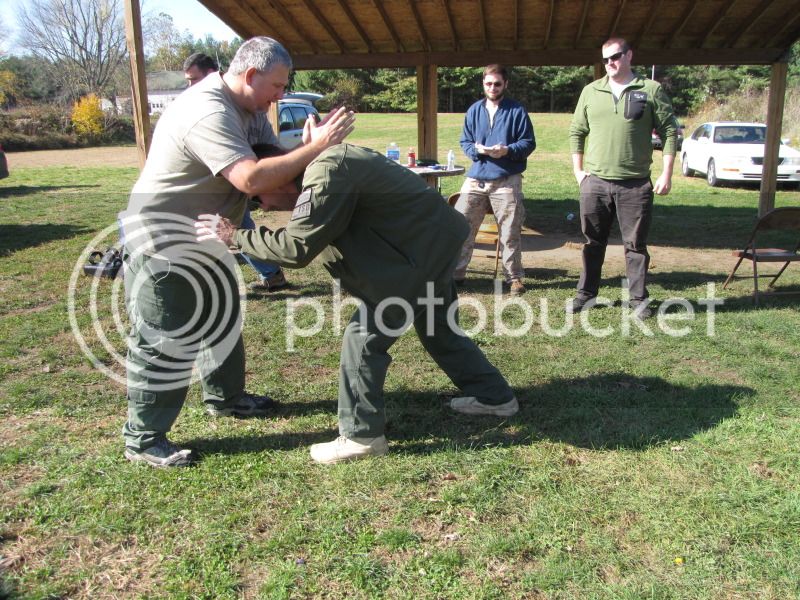 At this point it became obvious that we were going to delve into ground fighting. This is where everyone put on their mature Big Boy pants and thought to themselves "fighting isn't gay so surely learning how to fight isn't gay . . . . . " Right?

I've never touched another man so much in my entire life (swear!).

But it paid off and we learned some valuable lessons. 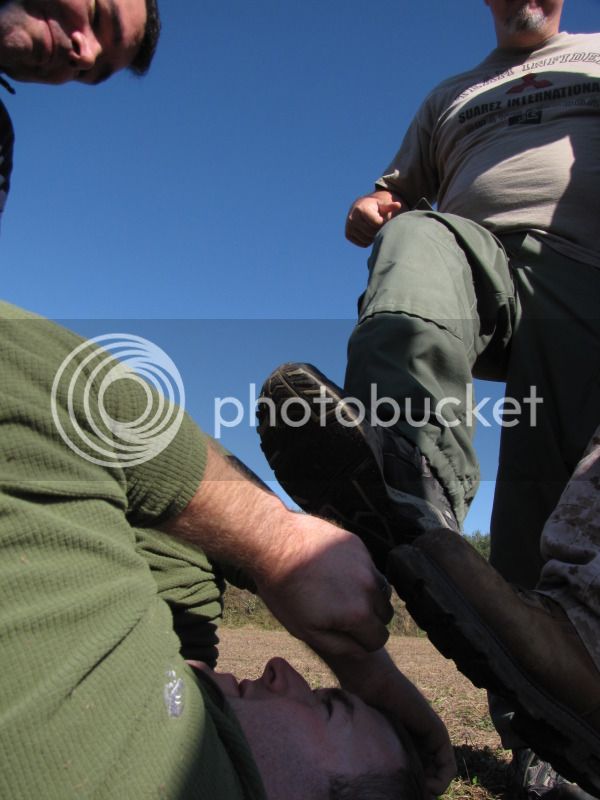 Or "don't get engrossed in fighting, because you might miss the bigger picture". (airsoft Glock used for demo purposes) 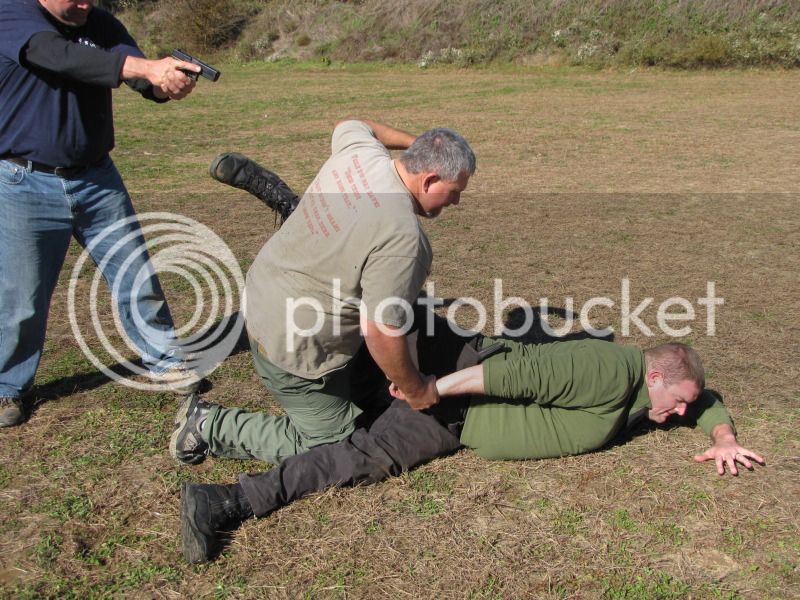 We talked about positions you don't want to be in, and how to get out of them. 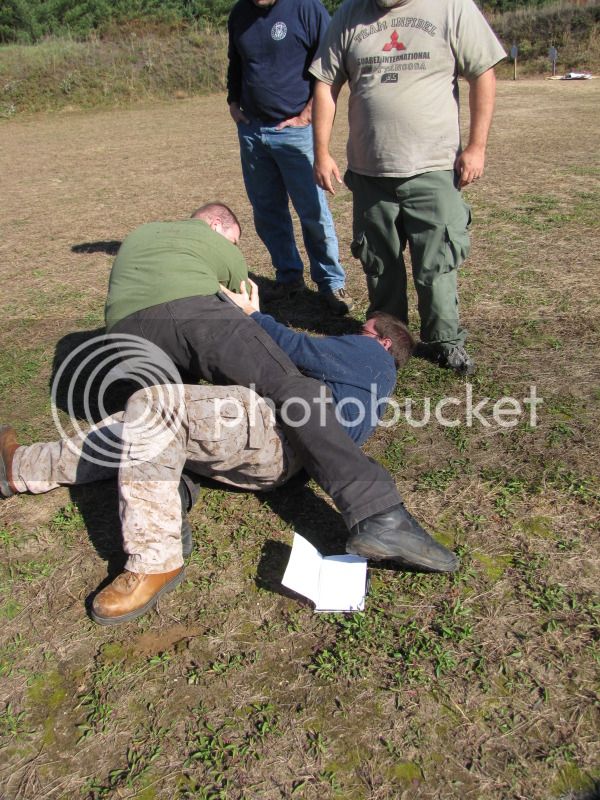 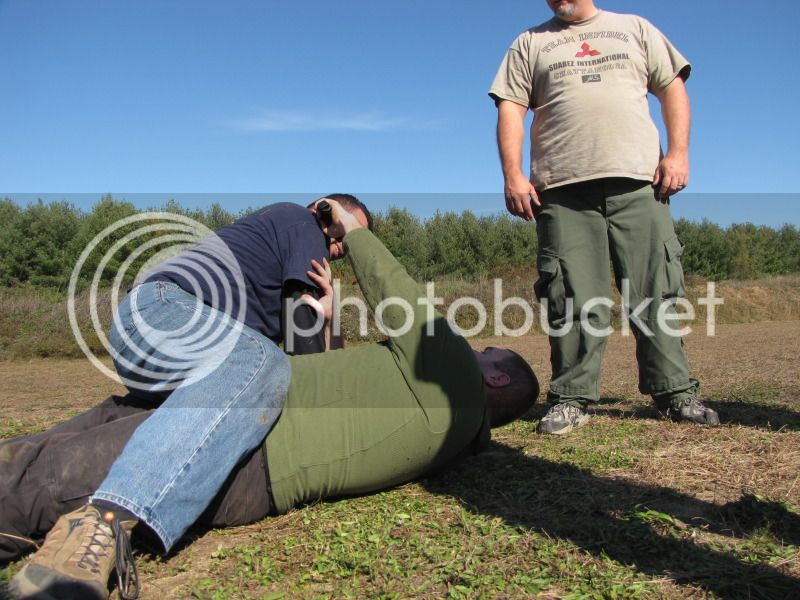 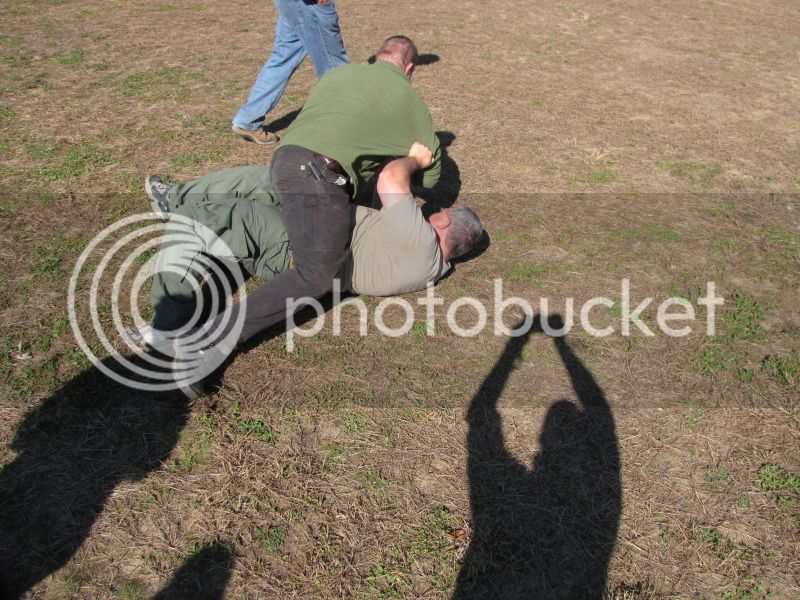 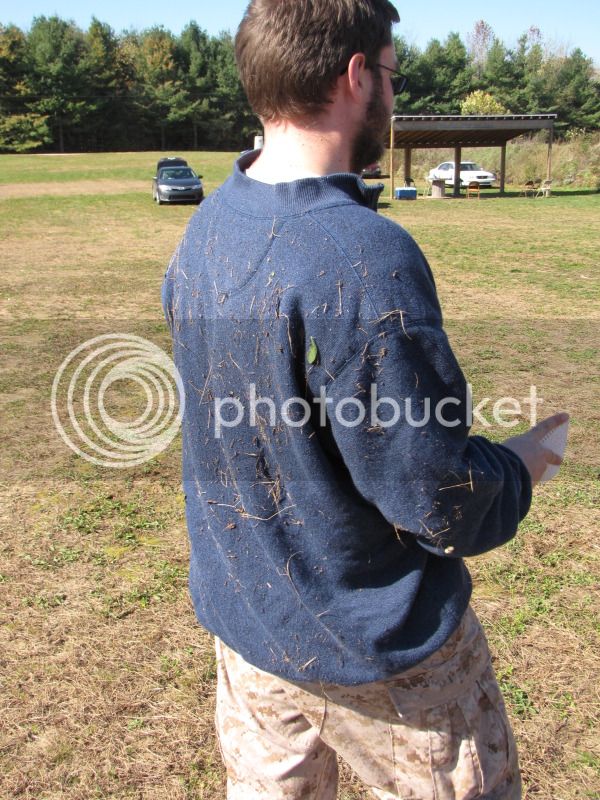 The final exercises included 10-12 opportunities to go 75% speed against a padded-up aggressor utilizing the techniques we had learned. Some went well, some did not. I won some, I lost some. But I learned more by failing than I did by winning. In no particular order: 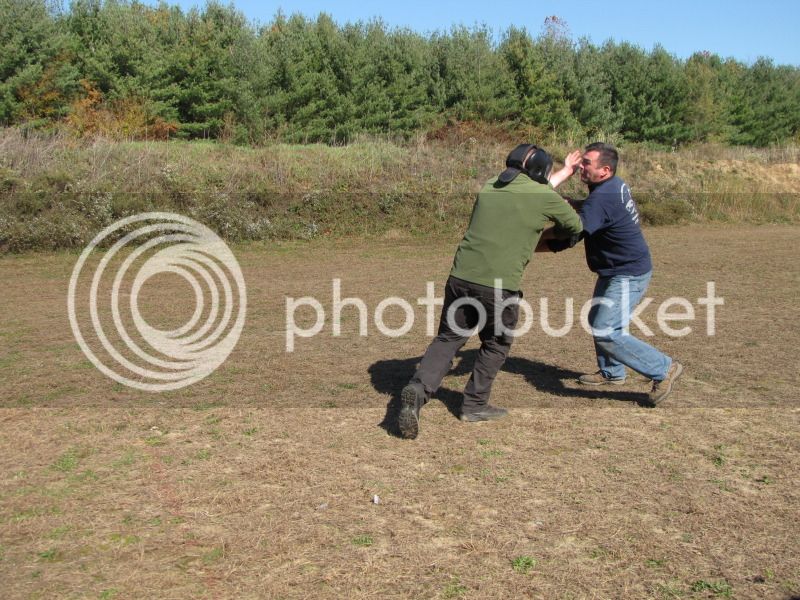 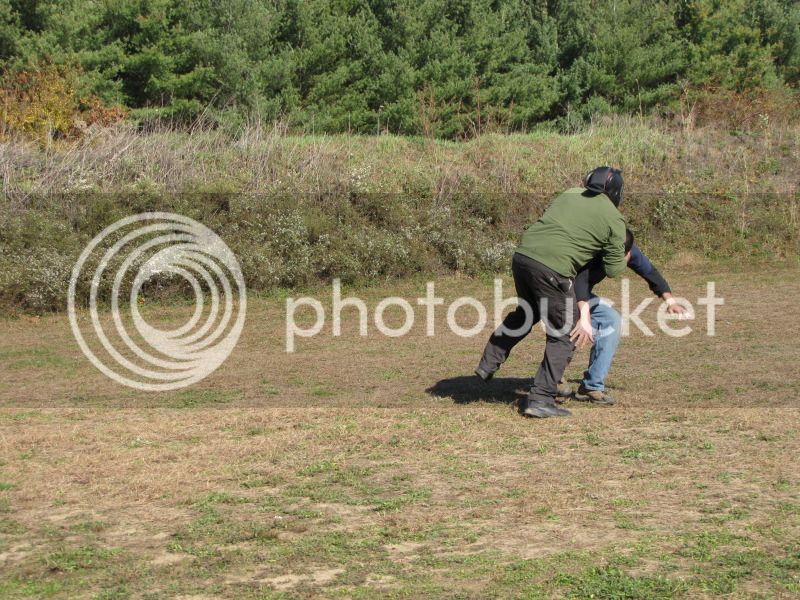 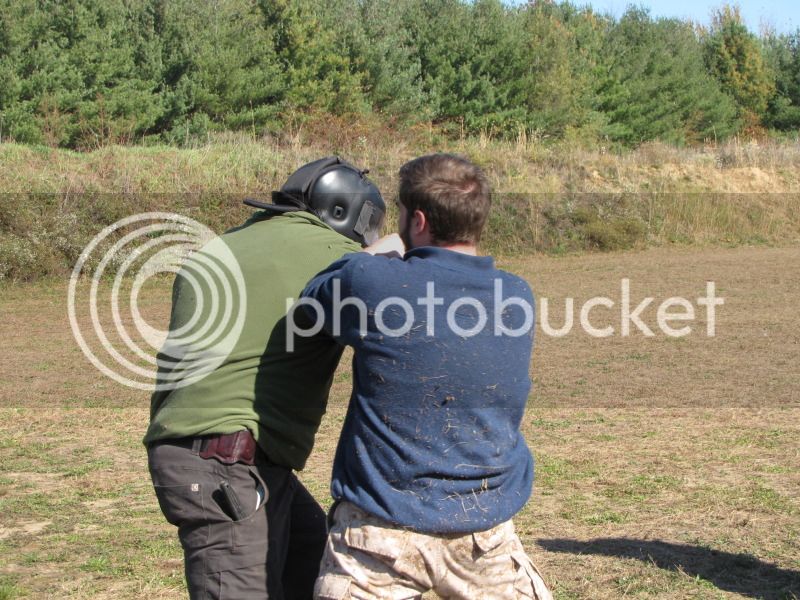 Many thanks to Jeff for going all of those rounds!


At the close of Day 2 certificates were handed out and we gathered for a final class picture. 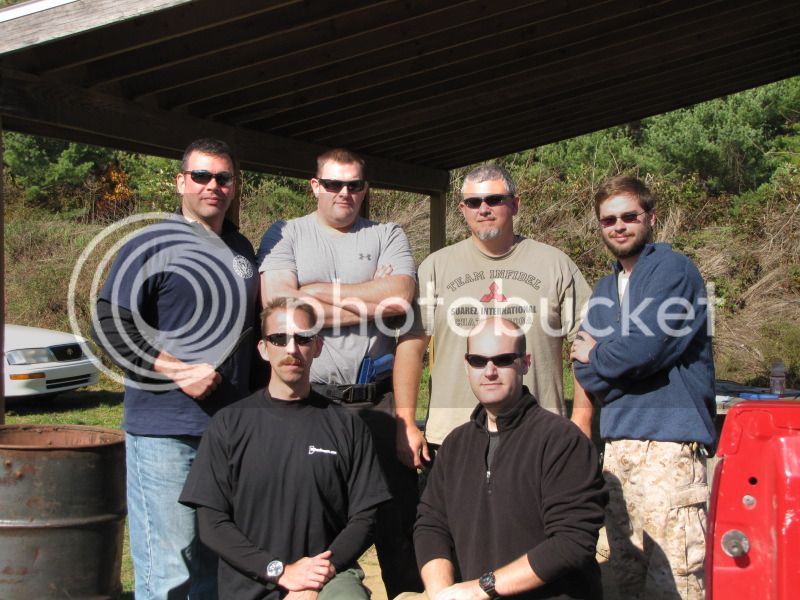 If you only train with your firearms then you are missing a big part of the self-defense picture. Not every problem can be (or should be) solved with a gun. In life you are more likely to need hand-to-hand or less-lethal options than you are a gun. Yet these are often neglected in lieu of sexy high round count gun courses. If you need to "fill the gap" then I recommend some combatives course generally and those offered by Suarez International specifically.

Randy Harris put on a good program with some very well thought out points and techniques. I never felt overwhelmed or like I couldn't perform these techniques on the street in a real confrontation. The material was presented in a digestible fashion on a level that anyone could quickly pick up and utilize.

I will say that on Monday morning I was quite sore, my arms were bruised, and lifting a bottle of water felt like exercise. In retrospect I probably should've popped a few aspirin before going to bed. Otherwise we had no injuries or issues.


I hope you enjoyed this AAR and maybe its given you some food for thought. If you have any questions I'd be glad to answer them.

Well we learned from another thread that you are not a Poser. ESRICE is becoming one bad man! As always I enjoy seeing the pictures.

I am disappointed in not seeing in action pics of Evan...

jeremy said:
I am disappointed in not seeing in action pics of Evan...

Yeah that is kinda tough to do when I'm trying to work in pictures while still paying attention and participating. I like when I can get self pics of training though, as I find them a very helpful tool.

esrice said:
Yeah that is kinda tough to do when I'm trying to work in pictures while still paying attention and participating. I like when I can get self pics of training though, as I find them a very helpful tool.
Click to expand...

I figured you were either a poser, or not showing us pics of you getting the beaten into a pancake...

jeremy said:
I figured you were either a poser, or not showing us pics of you getting the beaten into a pancake...

esrice said:
I can provide references if you'd like.

To which you being a poser, or being beaten into a pancake?!

jeremy said:
I am disappointed in not seeing in action pics of Evan...


Sorry about that. I can be dense some times. It never dawned on me till now to take some pics of Evan. He must have been to out of breath to ask.

I'll remind you with PM the next time Evan takes Courses with you again...

jeremy said:
To which you being a poser, or being beaten into a pancake?!

Well we have already established that Evan is not Poser!


cedartop said:
Sorry about that. I can be dense some times. It never dawned on me till now to take some pics of Evan. He must have been to out of breath to ask.

Oh that explains it.....he was getting beaten into a pancake.

Excellent review. Thanks for doing it.
R

Martial arts are something you do with someone. Combatives are what you do to someone. You only have 2 arms and 2 legs and they only move in certain ways. The stuff that works among all the different styles looks alarmingly similar and all of it is gross motor skill. Add in some aggression and initiative and you don't NEED any crouching tiger hidden dragon super secret kung fu.

Ralph Mroz is credited with saying something to the effect of everything works at 25% resistance, most things work at 50% resistance, a surprising amount of stuff still works at 75% , but very little really works at 100% resistance.

THAT stuff that works against a resisting opponent is what I am concerned with. I do not really care what someone can pull off against a compliant opponent in the dojo. The problem is when what you do is dependent upon them "attacking you the right way". What I am interested in is what works when you are behind in the reactionary curve that helps you survive the initial ambush and regain the initiative. Those things need to be intuitive, instinctive (if possible) and simple and work in conjunction with how your body works under stress.

I think it was pretty cool that we had some big time wins for the good guys in the practical application at the end of the day. That is pretty cool since the students had only been exposed to the material for less than a day at that point. Of course we also had some losses, but fights are not tea parties and sometimes we do not win and we just hope to minimize the damage we take and get away. The hope is to keep those losses few and far between.

I really appreciate everyone coming out and working hard and getting out of their comfort zone. While the techniques are simple and easily retained this is not something you can learn just watching a movie or a dvd. There has to be some practical application. Riding a bike is easy and easily retained... but you can't learn to do it just by reading a book about bicycles. You have to get out and ride.
You must log in or register to reply here.
Share:
Facebook Twitter Reddit Pinterest Tumblr WhatsApp Email Share Link