actaeon277 said:
Yes.
And I've explained to one using the "Bear Example".

You're not afraid of me.
Cause if you were, you wouldn't be here yelling and waving your arms around.
If a bear came into the restaurant, I wouldn't run up to it, yell at it, and wave my arms around.
Since you are, you must not be afraid.
Click to expand...

I'll have to remember that one.

JTScribe said:
I'll have to remember that one.
Click to expand...

I have my moments.
Few and far between, but I have them.

actaeon277 said:
Yes.
And I've explained to one using the "Bear Example".

You're not afraid of me.
Cause if you were, you wouldn't be here yelling and waving your arms around.
If a bear came into the restaurant, I wouldn't run up to it, yell at it, and wave my arms around.
Since you are, you must not be afraid.
Click to expand...

I'm not sure, but I think that's exactly what is advised when you encounter a bear. Make a lot of noise and make yourself appear "big" in order to scare it off...

Timjoebillybob said:
Ehh, not sure I'd say that about Breonna, I will say that it seems to me to be a justified shoot.
Click to expand...

DoggyDaddy said:
I'm not sure, but I think that's exactly what is advised when you encounter a bear. Make a lot of noise and make yourself appear "big" in order to scare it off...
Click to expand...

In a restaurant, I think it's walk out and shut the door.
Bears don't have thumbs.

actaeon277 said:
In a restaurant, I think it's walk out and shut the door.
Bears don't have thumbs.
Click to expand...

There are no bones in ice cream!

The bear cannot grasp the doorknob without an opposable thumb.

IndyDave1776 said:
The bear cannot grasp the doorknob without an opposable thumb.
Click to expand...

You guys obviously don't watch any of those Alaskan reality shows. They don't look for a doorknob. They just claw their way into where they want to go!

I did not even know what that acronym meant...now I'm sorry I do.

is a place where felons cook meth?

EPeter213 said:
is a place where felons cook meth?
Click to expand... 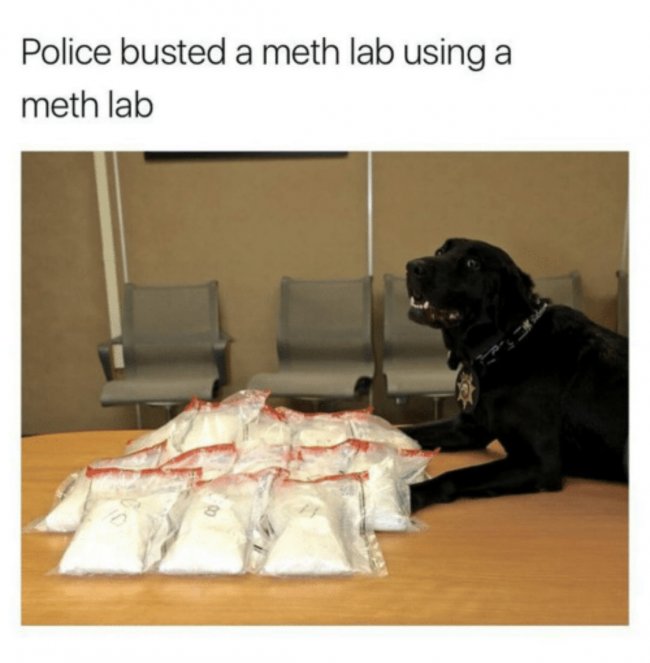 BugI02 said:
Not the first drug courier to get caught in the crossfire when the deal goes south
Click to expand...

Not disputing that. I stated IMO it was a justified shoot, that is not the same as saying that she got justice. Or got the justice she deserved.

Hatin Since 87 said:
WTF did I just watch?

And she says she is a teacher!

I would say I hope a copy of the video gets sent to the school, but they would probably just give her Teacher of the year. You know, because she's so brave.
R

Timjoebillybob said:
dealer? If not, the chances of being shot in a no-knock/knock and announce raid performed under a valid search warrant are quite low
Click to expand...

Any chance it too high. This goes back to my original point. One doesn’t have to be breaking the law or be a criminal to end up in a horrible situation.

Timjoebillybob said:
Especially if someone you are with doesn't shoot first and hit an officer
Click to expand...

Ya this is one of the big problems I have with a no knock warrant or even late night service of a regular warrant. My security system is gonna let me know well in advance that someone is outside my home, that’s pretty common now. It’s dirt cheap to have video monitoring, motion floodlights and the works now. Heck I can set it up so lights in my house comes on if sensors go off in the middle of the night, it takes like 10 minutes to set that up thanks to all this smart home stuff.

Everyone has a ring, or some other kind of camera that dings your phone when it picks up motion in certain zone during certain hours if you set it up like that.

Now if you get one of those notifications at 11pm-4am and hear a pounding at your door what are you gonna do? Are you or anyone else here gonna tell me with a straight face that your gonna put your hands on top of your head and get on your knees?
No one announced themselves, or maybe you heard some muffled shouts from your front door 30 feet away but the dogs going nuts so you don’t know what they said, 20 seconds after you get the notification the door flies in. Tells me that things aren’t about to go sideways for all parties involved.......

that FBI incident in Florida was a pretty good example of why a late night warrant serving can go south quick in 2021. Why hit the guys house at 2-4am? He has a job right? Does he leave his house for that job every day? My guess is they had no clue since they didn’t even realize he had a security system.Poor intel leads to ops going south. My prayers for those FBI agents and their families but that didn’t have to go down that way.

I cannot find the article I read quite some time ago that said brailsford left the country. That may well have been wrong info and mixed up with the partner like you said.

Danial Shavers widow is getting pretty active now to “seek justice” since the prosecution allegedly dropped manslaughter charges and stuck with only murder in a bid to get a not guilty verdict. Apparently Danial Shaver assaulted a law enforcement officer and that was used as justification for a search warrant obtained after the initial search. Little weird IMO
watch the video https://vm.tiktok.com/ZMeVttQht/

rooster said:
poke fun all you want, I’ve never had a negative interaction yet. But there in the back of my mind I’m keenly aware that should I fail to look submissive and say my yes sir’s no sir’s , I may well get lashed out at and end up beaten or worse.

The reactions I’m seeing here from LEO that have the inability to force me to bend to their will over the internet are kinda proving my point.......
Click to expand...

Man what are you smoking. Not one LEO making you bend to their will.

Lets do this.....ease up and look around. I read all of your posts. No issues with most except this thread because you are way the heck out in left field here.

I see what the reality's are here.

Tell y'all what...
Go watch Chris Rock's famous video "How not to get your a** beat by the police" and follow those instructions.
As I told my teen-age sons, "If we're going to fight the police, we're going to do it in court where the odds are more even."
You must log in or register to reply here.
Share:
Facebook Twitter Reddit Pinterest Tumblr WhatsApp Email Share Link