US rifles not suited to warfare in Afghan hills

Looks like the poodle shooter is outclassed in some circumstances. Maybe we'll finally see a return to something with some oomph in it. Altho, I doubt we're going to see today's infantry carrying a Garand into battle.

KABUL, Afghanistan (AP) - The U.S. military's workhorse rifle - used in battle for the last 40 years - is proving less effective in Afghanistan against the Taliban's more primitive but longer range weapons.
As a result, the U.S. is reevaluating the performance of its standard M-4 rifle and considering a switch to weapons that fire a larger round largely discarded in the 1960s.
The M-4 is an updated version of the M-16, which was designed for close quarters combat in Vietnam. It worked well in Iraq, where much of the fighting was in cities such as Baghdad, Ramadi and Fallujah.
But a U.S. Army study found that the 5.56 mm bullets fired from M-4s don't retain enough velocity at distances greater than 1,000 feet (300 meters) to kill an adversary. In hilly regions of Afghanistan, NATO and insurgent forces are often 2,000 to 2,500 feet (600-800 meters) apart.
Afghans have a tradition of long-range ambushes against foreign forces. During the 1832-1842 British-Afghan war, the British found that their Brown Bess muskets could not reach insurgent sharpshooters firing higher-caliber Jezzail flintlocks.
Soviet soldiers in the 1980s found that their AK-47 rifles could not match the World War II-era bolt-action Lee-Enfield and Mauser rifles used by mujahedeen rebels.
"These are important considerations in Afghanistan, where NATO forces are frequently attacked by insurgents using ... sharpshooter's rifles, which are all chambered for a full-powered cartridge which dates back to the 1890s," said Paul Cornish, curator of firearms at the Imperial War Museum in London.
The heavier bullets enable Taliban militants to shoot at U.S. and NATO soldiers from positions well beyond the effective range of the coalition's rifles.
Click to expand...

More at the source. Maybe the M4 is good enough in town, but in the boonies...not so much.

Read about this problem a couple of years ago. The article I read sounded like they were seriously consideiring it. They were going to go with new uppers and the round would single stack tin the standard M16 Mag. Just never hear more about it. Except for the 6.8 being available to the public. Might just still have that article around here somewhere.

I have seen pics of some of our men over there carrying M14s (too bad Clinton ground most of them up). If we are going to send these young men into harm's way they need to have the appropriate equipment.

I was going to just call BS, but this is just destined to become a caliber war so ill just say this.

There is no way in Hades im listening to anything that the AP is saying on the effectiveness of a battle rifle. If the military hates it so much then let them tell us it sucks. Some museum dude with a fancy degree isnt what I call a credible expert.

*not directed to anyone personally, but at the APs BS they call news*

Edit: that kinda sounded like im defending the 5.56 so let me rephrase.

The 5.56 sucks compared to the 308 sure ill agree 100%. But you just cant write it off as ineffective past 300meters. Ive seen a single 223 shot drop a deer from 556 yards so saying it cant kill past 300 meters is complete BS and the AP should know better than publish that BS.

Expat said:
I have seen pics of some of our men over there carrying M14s (too bad Clinton ground most of them up). If we are going to send these young men into harm's way they need to have the appropriate equipment.
Click to expand...

I thought they were digging up every 14 they could get their hands on. That's one of the reason there has been a surge in all the new stocks and things for the M14 platform. I love the old battle rifle!

Colt556 said:
I thought they were digging up every 14 they could get their hands on.
Click to expand...

I have heard that as well. 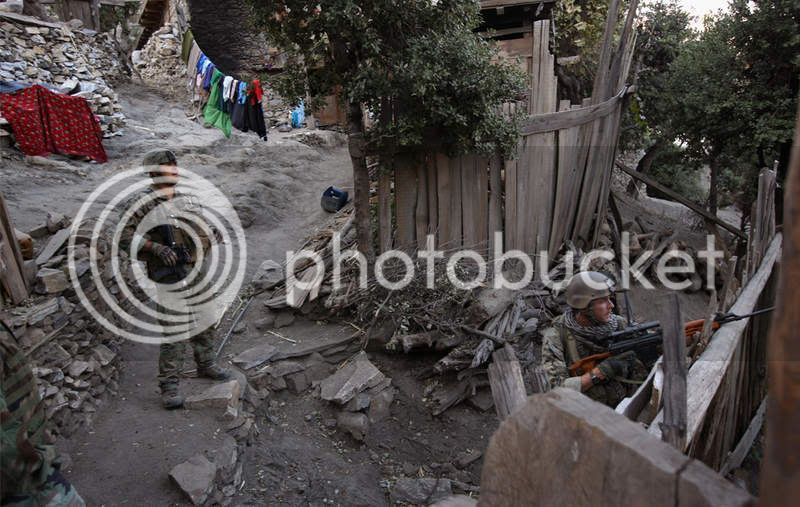 it would be great to see the m14 being issued as standard again. that gun is the s#*t.

Agreed. The fact remains though that the 5.56 is simply NOT the best round for every situation. If we're going to send our boys into battle, then we should be damn sure we are giving them the best equipment in the best-suited caliber to get the job done. Period.
Z

mrjarrell said:
Looks like the poodle shooter is outclassed in some circumstances. Maybe we'll finally see a return to something with some oomph in it. Altho, I doubt we're going to see today's infantry carrying a Garand into battle.

More at the source. Maybe the M4 is good enough in town, but in the boonies...not so much.
Click to expand...

Articles like these seem to come out every month or so for the past 40 years.

Go to mil.com There have been several articles and studies done in the last few months talking about this very issue. The US military is very aware of the severe limitations of the short barreled M4 at any distance.

There is also a report written by a Army Major that the Army needs to reclaim the riflemans 500 meter range with a rifle capable of effective fire at distance. I think I read on mil.com through the Appleseed website.
T

I'm not a ballistics expert so correct me if I'm wrong. I've always ben of the understanding that the 5.56 round was designed for close quarters. And, that NATO dictates it be an FMJ round. I have seen ballistics gelatine shot with 5.56 fmj and it's my understanding that it's very effective for CQB because the round start to tumble after penetrating a couple inches. Is this correct? I also understand the rounds size lack the weight to carry enough energy at longer ranges.
M

It may not be the optimal round at that distance, but you'll never convince me it's ineffective at that range either!

For the last few years, they have issued Black Hills 77 grain match ammo for use at the longer ranges. It really is not the caliber that is the major part of the problem, it is that they shortened the barrel from the original 20 inches to the M4 length.

The Marines STILL qualify at 500 yards with the M16, but they are shooting the 20 inch barreled version. Heck, I and lots of highpower shooters, shoot the AR at 600 yards with 75 grain match hollow points out of a 20 inch barrel.

Also the hollow point match ammo for .308 and 5.56 are legal since they are not expanding hollow points.

Here is the link to the Army report for the Command and Staff College;

The Captain's Journal Taking Back the Infantry Half-Kilometer

Of the many interesting facts in this long diatribe, is confirmation that the M16 was to be a replacement for the M1 CARBINE, not the battle rifle.
Last edited: May 21, 2010

sloughfoot said:
Here is the link to the Army report for the Command and Staff College;

The Captain's Journal Taking Back the Infantry Half-Kilometer

Of the many interesting facts in this long diatribe, is confirmation that the M16 was to be a replacement for the M1 CARBINE, not the battle rifle.
Click to expand...

Interesting. I'd not heard that.

My dad was a Marine in WWII in the South Pacific. He HATED the M1 Carbine. He said it was a pathetic little cartridge which was ineffective at any distance, and that the weapon itself was best used as an extender for the bayonet. I got to hear all about it when I bought an M1 Carbine to add to my collection years ago.

maybe the army will trade me one for one m4s for mosins and mausers.

7.62x51 NATO is the way to go.(and NO it is NOT the same as .308. If you disagree, go put some .308 through a fluted chamber and then come talk to me.) M14 is a good choice, although, I am a big fan of both the HK G3(and all it's ridiculous variants) and the FN FAL. There are some good modern platforms to turn to as well, but the latter 3 mentioned are all battle proven.
You must log in or register to reply here.
Share:
Facebook Twitter Reddit Pinterest Tumblr WhatsApp Email Share Link