I used to fly a lot with guns either for matches or personal protection. I remember the airlines were trying hard to get customers to use the KIOSK instead of a human being. At first, it was a casual suggestion. Then it became demanded by the KIOSK NAZI"S. When I kept saying, "No Thank you, I can wait" they would go into their sales pitch about the KIOSK can do everything the teller can do. Getting fed up, I asked loudly, "Can it check my firearm or tell me how Betty's (my favorite check in lady) Grandkids were doing? I have not flown since 911 so I do not know if the KIOSK can check your firearm baggage. I know this, that KIOSKS are a testament to the growing number of people that need the service and as the masses grow there becomes a sacrifice in society. The compromise is Speed versus Social interaction. Manufacturing is no stranger to automation and engineering to make something cheaper for the masses that enable it.

Some call the Ruger Single Six 22/22Mag Convertible an expensive rimfire. Getting this fresh one that was built in March of this year is my newest Single Six. An all stainless version with a 6 1/2-inch barrel, this gun is hefty as compared to the low dollar rimfire single actions on the market. But I have always been a "Pay more now so you are not paying a lot more later" kind of guy. The return comes in shooting this thing. The groups pictured were from my homemade pistol rest and was not necessarily shot for groups but for impact position changes if any between the 22LR and the 22WMR. I have had some shorter barrel convertibles that played havoc with the impact location. Mostly due to faster bullets getting out of the barrel before muzzle rise and vice a versa. I am often asked why not the The Single ten or 7 or any other revolver with more than 6 chambers. For me it is a personal thing. Six rounds leave me more steel in the cylinder, goes with all my other revolvers for simplicity and conformity. Knowing that I am not shy to state my opinions, quite simply, more than six rounds in a revolver turns it into a video game gun for me. To each thier own.

It was a beautiful morning at the range with sunshine, clear skies and a brisk 34 degrees. After setting up my target and visiting with a few other shooters, I shot the enclosed groups with CCI cartridges. Now, I must confess, I swapped out the front sight with an all steel one from yesteryear as Ruger supplies aluminum front sights on these now.(see opening paragraph). Luckily I had a few in stock from the olden days. Aluminum is fine for beer cans but not on my guns. Since Fiber Optics are too fragile for me for field work, I paint my steel front sight with bright orange paint for better pickup. I also fit a Vaquero Style ejector rod as I do to all my Ruger Dingle Actions. The dished out larger finger pad makes spent case ejection a breeze.

The Ruger Single Actions are very easy to work on. So after shooting this gun for most of the summer, I recently took it apart, looked for the high marks and polished the metal contact parts. Very smooth now. I never recut the hammer notch for a lighter let off as smoothing parts and tuning the springs have worked well on every Ruger I own. I always end up with a nice let off around 4LBS and 100% reliability with CCI ammo. Next I had to address the grips. As I have said in other reviews, Ruger refuses to fit a set of grips correctly to their frames. They leave mucho metal showing or the wood is overhanging on most production models. I tried a new vendor for Ruger grips. http://chigsgrips.com/. Chad fixed me up with these spalted maple grips and fit them very nicely to the frame. I have not decided to keep the green stain on them yet but time will tell.

This Ruger Model 0626 is a dream to shoot. The 22 WMR is a very potent round for Mr Groundhog or other vermin inside the 75 yard range. I will admit that back in the day I used to shoot a lot of 36 Grain Higher Velocity Rimfire rounds but about 10 years ago, the only thing I shoot now is 40+ grainers and the four rounds I play with are Target, Mini-Mags, Velocitors, and WMR all CCI products. This revolver will last for several generations and is overbuilt in Ruger Fashion but that is alright for me. In a world of cost cutting and building things to not last forever, I am glad Ruger enables the market to include Rugged reliable firearms for fair prices. The last thing I will put up with is faulty equipment in the field as I am allergic to "click instead of bang" and for that, there is no compromise. 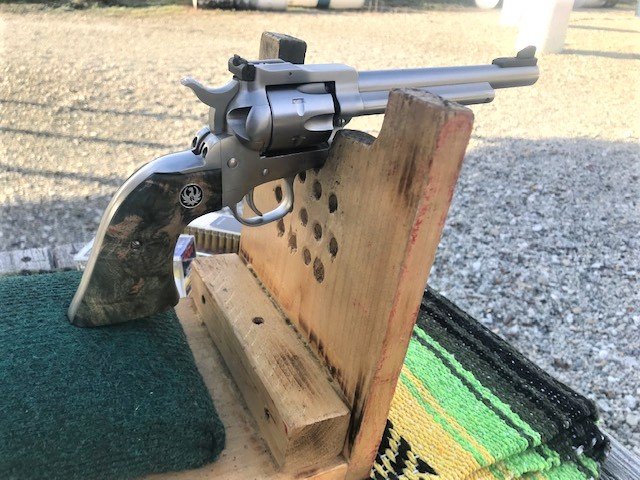 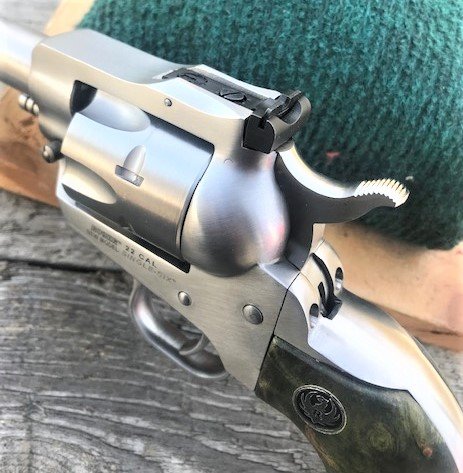 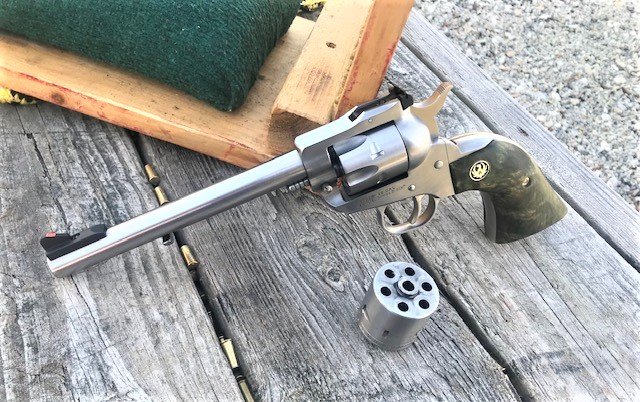 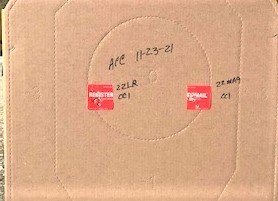 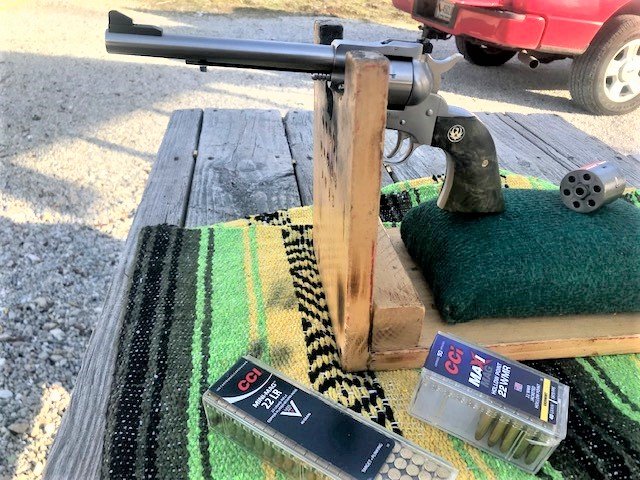 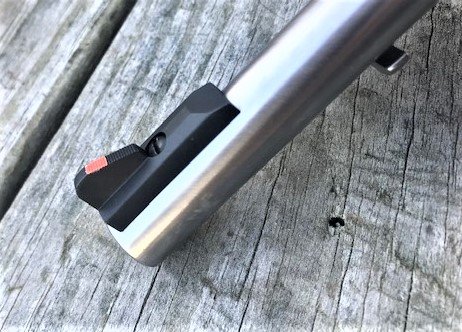 Nicely written review! I've enjoyed my 5.5" stainless Single Six since 1999. A pure pleasure to shoot and the accuracy is quite good with the 22lr cylinder.

I've fired the 22 mag very little over the years but did briefly test some mag loads that were quite accurate.

Like you the 6 shot in a revolver is all I need and have never had the desire for more shots in a Single Six.

Nice review! My 5.5" stainless single-six is also one of my favorites. It's very accurate and built like a tank. In a world of pot metal and aluminum rimfire guns, it's nice to still be able to get one that shares it's build quality with my centerfire Blackhawks. I also concurr about the high-capacity revolvers...6 is just right (although 5 is also ok in a snubby). I recently picked up a S&W 63-5 8 shooter, and while I really like the gun, those extra 2 holes in the cylinder don't do anything for me, and I'd be just fine without them.
B

I love my Single Six convertible also. It makes me wish I could find a Blackhawk in .357/9mm.

Would love to have one, and yours is beautiful OP, but I'll just have to stick to my Ruger Wrangler for now. The prices on the real deal, even if I could find one in the stores around here, are steep.
You must log in or register to reply here.
Share:
Facebook Twitter Reddit Pinterest Tumblr WhatsApp Email Share Link