Jaybird1980 said:
I just heard that the plan to retire the other units have now been pushed back. The closures were by 2023, now they are supposedly sometime in 2025/26.

Oh and now they're trying to find a way to bring one of the retired units out of retirement.

Apparently being a power purchaser is expensive

Think of how a constricting snake works. It stops the squeeze and loosens momentarily only to get a tighter grip and constrict more. I have watched this phenomenon for years now in the energy sector (and others). The people driving this situation don't give a wit about facts or Truth. Rest assured you are the carbon they intend to eliminate.

BugI02 said:
It will take years to wind its way through the courts, with the utility foot dragging at every opportunity to bleed the plaintiffs. By the time a verdict is reached the damage will be done and even if you win the lawyers will get half the money and quite possibly you'll just be offered a credit towards future purchases of power as your damages
Click to expand...

I agree with your general premise, but honestly I would advise throwing everything we have at them while we still can. Even things that have a low likelyhood of success. Hit them from every angle possible. Quite frankly, its the same tactic "they" are currently using against us. (They = global NGOs, WEF, WHO, UN, Corps etc)

rooster said:
To add to this I’ve read that many utilities are asking for waivers for generation capacity. Meaning that they are asking to not be penalized for these rolling blackouts that are a direct result of shutting down coal plants.

jwamplerusa said:
This is what happens whenever you elect subversive Communists (AKA Democrats) who desire to manage the economy through State control. The only difference between what Stalin and Mao did versus our current swamp is the names of the directorates.

When you have the state using eco-terrorism to curtail energy production you cripple your own economy to benefit your adversaries.

Below is kind of ringing in my ears.

"We hold these truths to be self-evident, that all men are created equal, that they are endowed by their Creator with certain unalienable Rights, that among these are Life, Liberty and the pursuit of Happiness. That to secure these rights, Governments are instituted among Men, deriving their just Powers from the consent of the governed, - That whenever any Form of Government becomes destructive of these ends, it is the Right of the People to alter or to abolish it, and to institute new Government, laying its foundation on such principles and organizing its powers in such form, as to them shall seem most likely to effect their Safety and Happiness. Prudence, indeed, will dictate that Governments long established should not be changed for light and transient causes; and accordingly all experience hath shewn, that mankind are more disposed to suffer, while evils are sufferable, than to right themselves by abolishing the forms to which they are accustomed. But when a long train of abuses and usurpations, pursuing invariably the same Object evinces a design to reduce them under absolute Despotism, it is their right, it is their duty, to throw off such Government..."
Click to expand...

The left and right are wings on the same bird. Holcomb and Young are local examples of being completely compromised (usually thru greed or sexual degeneracy). This ultimately is about good vs evil not team red / team blue.

TheTrooper said:
The left and right are wings on the same bird. Holcomb and Young are local examples of being completely completely compromised. This ultimately is about good vs evil not team red / team blue.
Click to expand... 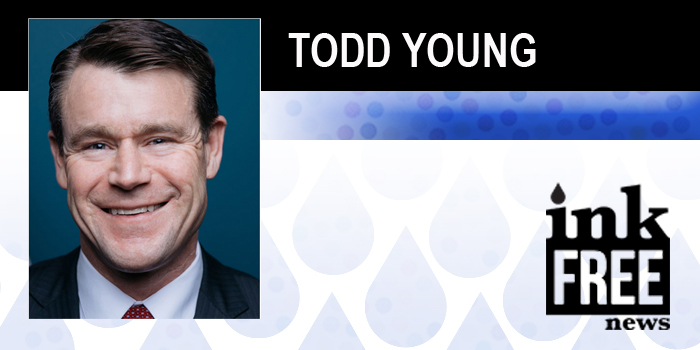 U.S. Sen. Todd Young on Tuesday, June 21, joined 13 other Republicans in supporting gun safety legislation that appears to be moving closer to passage.

U.S. Sen. Todd Young on Tuesday, June 21, joined 13 other Republicans in supporting gun safety legislation that appears to be moving closer to passage.

actaeon277 said:
especially when people with pitchforks show up asking why they don't have power.
Click to expand...

I could definitely see that happening.