Alamo said:
I’m still looking for an article that provides a ”legal” source for freezing an account.
Click to expand...

I am wondering if he is calling some mechanism "frozen" that I would not consider "frozen". Actually freezing an account- barring all account access and activity due to a court order is highly unusual even with more serious financial crimes. It cannot be done without a court order (I guess someone could agree to it).

If this was Indiana, I would have already looked at any orders in the case. I don't have that kind of access for California.

Something just doesn't make sense about this. I am not accusing Mr. Racop of untruthfulness, far from, but this doesn't add up.

For the articles that bother to provide a source, it’s always Racop. Is it possible that his own bank has decided to sit on the account for some reason?

Alamo said:
For the articles that bother to provide a source, it’s always Racop. Is it possible that his own bank has decided to sit on the account for some reason?
Click to expand...

That is one of the things that came to my mind. A warrant is served for records, but the bank gets hinky...problem is, there are very strict laws about account access (in the absence of a court order).

[ETA] I have been able to look at the docket for the criminal case, that is, the list of filings, but not the filing themselves. I don't see an order entered that would indicate the "freezing" or seizure of an account, but again, I may not be familiar enough with California procedure to know what to look for.
Last edited: Aug 5, 2022

Destro said:
When there are services and money involved, the lines between a civil vs. criminal issue can be very blurry. Sometimes they can overlap.

I am wondering if the case is sealed because of financial information and/or sensitive information in it?
Click to expand...

I still don't see how it can possibly be criminal. The buyer made payments for something he expected to get in the future. He missed payments and didn't contact the seller for months, so he got put later in the queue. If he had made all of the payments, he still wouldn't have his car, he would just be more toward the front of the line.

If I was the seller, I'd just refund the guy his money and refuse to sell to him. No matter how it goes, the buyer is going to be a nightmare client. 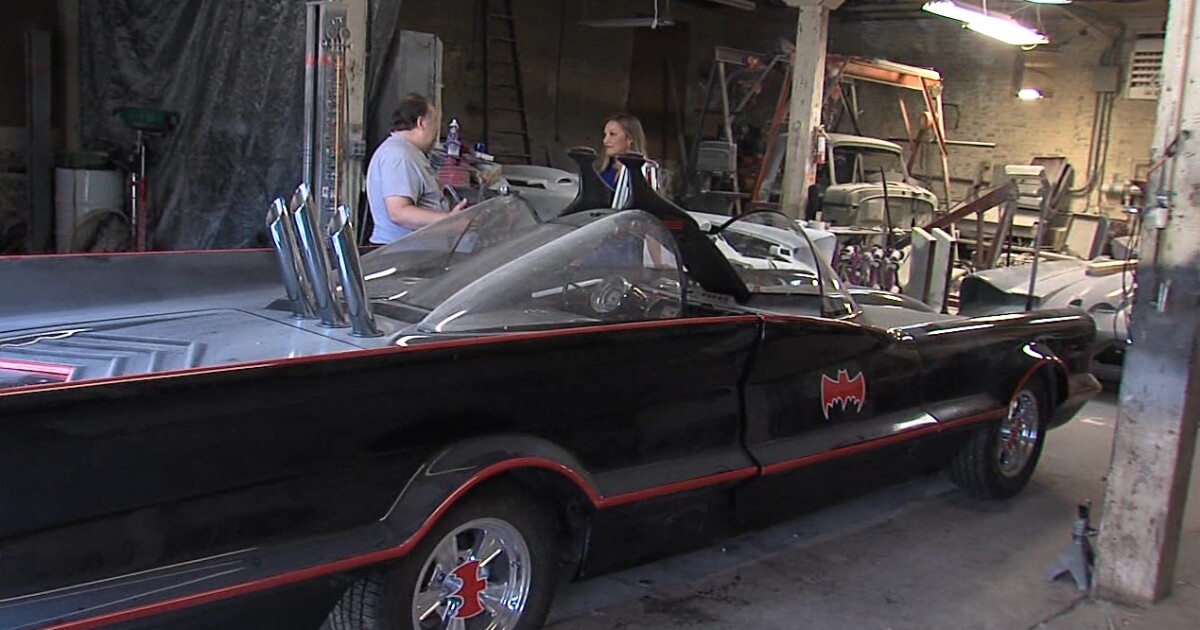 Fiberglass Freaks was raided last by a California sheriff's office and the owner believes the sheriff did it as a favor to his friend, who is upset at how long his custom Batmobile is taking.

nothing really different that hasn’t already been reported, but it also says his bank account has been frozen.

If so, that would seem to disrupt the delivery schedule for all his other customers. So now do they sue Racop over schedule slip?

EDIT: Well rats, apparently WRTV restricted the video from being played outside of YouTube.
Click to expand...

I would expect having a frozen bank account would also prevent him from paying his suppliers, so he may not be able to complete any cars at all.

printcraft said:
Where else are they going to go to get their bat mobile since he is the only one licensed to build them?

My conspiracy mind immediately goes to someone affiliated with the sheriff wants to steal the license rights from Racop
so they are going after him to get DC to drop licensing because of the "controversy" in favor of one of their other associates in commifornia.
Click to expand...

It might be interesting to see who is paying for the sheriff's lengthy vacation, and who he is going to work for after he leaves office.

Aug. 3—The Logansport community is rallying around local business owner Mark Racop as he prepares to fight two criminal charges filed in California due to a business dispute. Racop owns the only shop licensed by DC Comics to build fully-functional 1966 Batmobile replicas. Racop said customer Sam...

I’m still looking for an article that provides a ”legal” source for frezing an account.
Click to expand...

They're in California. They don't worry themselves over such trivialities.

Near the big river.

Yup....they didn't think this would go public like this. AG seems like a good guy looking at the case and the sheriff and rich guy looking more and more like the scumbags that they are. The Bat guy doesn't seem to of been doing anything criminal and hadn't defrauded anyone, and now they refuse to talk. Now rich guy wants refund...too bad and too late. I would say by next week the AG is going to make the criminal charges all go away....he is no doubt getting heat from the public why his staff gave the OK for the warrants costing his voters tax $$$.

Now make the sheriff and the rich real estate goon pay pack the cost of the shake down trip.

printcraft said:
Now make the sheriff and the rich real estate goon pay pack the cost of the shake down trip.
Click to expand...

AND all the $$ they've cost the guy in legal fees and expenses.

Or just wait until hopefully he sues the unholy **** out of them for expenses and punitive damages. I would have to think that would be a cheeseburger pitch and gimme home run.

jedi said:
So how does this work?
Cali is charging him with a state felony but did not take him with them.

So what if he does not go to court? Can Indiana force him to go?
Click to expand...

Warrant issued with extradition. Locals arrest him on the warrant, but CA has to make the arrangements for extradition and pay for it. They can send someone to transport if they can get here quick enough, or arrange for the US Marshals to transport.


jedi said:
OK but I guess my question is. Say the Cali court find him guilty cause he does not should up and they want to toss him in a Cali jail.

But he is in Indiana. Can they actually come and take him from indiana? Would not indiana stop it as it's not in their jurisdiction?
Click to expand...

In criminal cases, you can't be tried absentia. Civil cases you can be found liable for not showing up, but absentia trials for criminal matters are not a concern in state courts. I think *maybe* for some treason trials? Not even sure on that, but it's just not a thing in this context. You'll get a "failure to appear" warrant, but you won't be found guilty. In some circumstances, some witnesses may go ahead and testify. Say the state flew them in at great expense, they have a sick parent they have to take care of and getting there that day was already a burden, etc, and the trial will then be bifurcated with your lawyer representing you without you being there, but the trial will then "pause" until you are picked up (or show up on your own) and a new date is set for the trial to resume.

Also everyone is still saying bank accounts frozen. The DA does not dispute this when a reporter says it in an interview. A picture of a wrrant for bank account records is shown. ??
Last edited: Aug 10, 2022

Also everyone is still saying bank accounts frozen. The DA does not dispute this when a reporter says it in an interview. A picture of a wrrant for bank account records is shown. ??
Click to expand...

Also everyone is still saying bank accounts frozen. The DA does not dispute this when a reporter says it in an interview. A picture of a wrrant for bank account records is shown. ??
Click to expand...

Another verification that the bank accounts were frozen…

BehindBlueI's said:
In criminal cases, you can't be tried absentia....
Click to expand...

Not that's its critical in this case, but a person can be tried criminally in absentia, but it is exceedingly rare.

The Court must exercise jurisdiction over the person, that is, serve the arrest warrant and charges (information, criminal complaint or indictment). After that is done and usually after a trial date is set, if the person secretes themselves away with knowledge of the trial, they can be tried in absentia. However, a conviction based upon a trial in absentia is open to many procedural and constitutional attacks which makes overturning it on appeal more likely than a normal trial result, so very few take place. However, they do take place.

In that case, the Indiana Court of Appeals upheld the conviction in absentia.

I had a client (on the civil side) that allegedly fled the jurisdiction to avoid criminal charges and civil suits (a friend of mine was his criminal defense attorney). He was indicted in absentia for 22 counts of healthcare fraud in federal court, but they did not pursue the case until he was eventually captured (5 1/2 years later) and returned to Indiana. They did not want to risk having to try the case twice.

So rich guy sued Batman for missing payments and not getting his car. CA rejected the lawsuit and told rich guy you have to file lawsuit in IN. Rich guys lawyers told him to forget the lawsuit and don't pursue it in IN. (Rich guy knew he could win in CA with thugs he owns, but has no leverage in IN imho). So then rich guy gets dirty Sheriff who paid $$$$ to get him elected again (but failed). So no lawsuit so sicks the sheriff on batman. So why no arrest and why didn't they take the car since they were suppose to and had the paperwork...? Because when they got their the car was not finished, they were expecting a finished car to haul off, and the ones finished didn't belong to rich guy. So IMHO the head detective called or text the rich guy and said if we take the car its not done, you want a unfinished car? So the Rich guy said crap leave the car and him so he can get to work on it. But the problem is they froze his bank accounts and no one knows why, so now he can't get the $$$ to finish the car.

I think the DA will still get this all dropped. Then Batman can sue the sheriff and the rich guy for damages.

Here we are on Weds. and the hearing is still on the docket (I checked) and nothing has been filed to cancel it.