Being a fan of cowboy action and lever guns - long before the current trend of it being cool - I came across this gem and needed to add another caliber to the collection. I've owned 38-40 and 32-20 before, so it's surprising that I've never owned a 44-40. Starline had the brass in stock for about 45 minutes a few weeks ago, so I grabbed some and needed a revolver to put it through. Enter the Cimarron Model P Calvary 44-40. 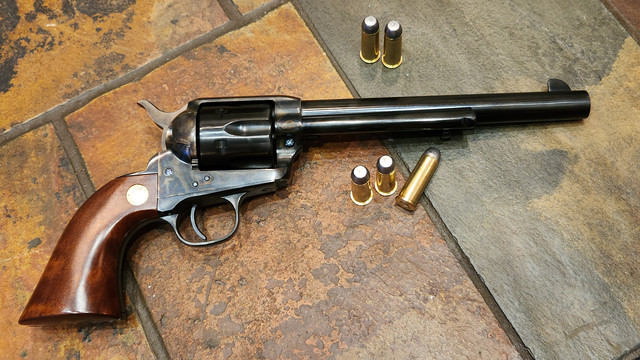 I've stayed away from 44cal stuff mostly due to the recoil and arthritis, it just hurts my hands too much. But this one is different. The 7.5" barrel makes it super soft shooting and since the bullets are almost crawling out of the barrel, there's no recoil. It does have a sincere, very unique sound when you shoot it though, a very stout POP, more like a balloon than a gunshot. That's a sound that only a single action produces. People that know it, well, know it.

One thing I learned about 44-40, pre about 1975, all bullets were .427-0.428". They're easy to get and since I haven't bought factory ammo since Bush Jr was in office, that made it an easy choice. Already had the brass, so again, easy. But... post 1975, 44-40's were chambered in .429-.431", so there is a much more plentiful selection of bullets for this revolver. My first batch of ammo was Hunter's Supply 0.427 200gn FP bullets from Midway over a 6.6gn charge of Trailboss. I wasn't aware of the caliber difference before ordering them, but they shot AMAZINGLY well. First run was 24 rounds at 7,14, and 21 yards on steel. 24 hits out of 24 rounds including (4) 2" steel targets and (8) 3" steel targets at varing distances. The sights leave a little to be desired, they're typical 1873 thin blade sights, but very accurate. Just an all around accurate pistol. Obviously the long barrel helps.

Case hardened receiver - beautiful, with a blued barrel and cylinder. A major difference between the 44-40 and the 45 Colt which I didn't know before loading is that the 44-40 neck brass width, 0.0065" is designed to seal the case to the cylinder upon firing which reduces gas blowback from the revolver. Cool, right? The cases come out as clean as they go in. This leads to an issue with the brass being difficult to load. It's apparent when 20% of the necks are bent in a new box of Starline brass. When you're loading them, just take a dowel or a pen and round the necks out before putting them into the 550. They're all good to go. Starline also makes their necks thicker than regular Winchester or Hornady brass, so they hold up better to being resized. I have .430cal lead bullets ordered from Missouri BC, so we'll see if they chamber properly.

44-40 revolvers are picky. They often won't chamber brass that's even meagerly oversized, and they scoff at bullets that are 0.001" too big, so I'm curious about the new bullets and we'll see if they chamber properly. Also, Uberti revolvers (of which this Cimarron P model is) have a reputation for light striking anything but federal primers. I didn't have any issues in the 100 rounds of ammo I shot, all of it being CCI primed.

I love black powder, but I'm not diligent enough to clean my guns after shooting them. I'm betting though that if I loaded some 40gn charges in this revolver, it would be a hoot. Might just try that soon. Not much better than an egg cloud of white smoke. Yum !

There are two versions of this revolver, the Frontier model made by Pietta and the Model P made by Uberti. This is a three click revolver which I prefer. Denny from Sandburr Gun Ranch said it best - "semi-auto cartridges are concessions. Shooting a revolver cartridge gives the maximum potential of a round, you're not settling." This is true.

In conclusion, this revolver is awesome. It's my first 7.5" SAA clone, and I'm not sure I'll buy anything else from now on. I'm big on the 5.5" versions. Have been for years, but this gun is accurate and the extra weight keeps the recoil down, not that there's much to begin with.

Below are the 0.427 chrono results from the first few rounds with a MAX load of Trailboss. I'm sure the speed will increase with the .430cal bullets from Missouri and will update the post accordingly.

Good review, have been shooting 44-40 a long time in older guns, both smokeless and BP, enjoy!

That is a beautimus gun! cool cartridge!

Great gun and a great review!!!

Historically speaking the 44-40 (44 WCF) firearms varied from .422" to at least .433" in rifles according to Winchester repair documents. Winchester offered .427 swaged lead bullets. However, dissected cartridges yielded lead bullets to be a small as .424". Winchester also offered .4255" JSP bullets by 1895 with pure lead tips. The lead bullets were to be pure lead when handloading, as so directed on the underside of the cartridge box tops.

Trail Boss, contrary to popular belief, is a great powder for the 44-40. Accuracy is spot on and consistency is...well...consistent. I use Trail Boss exclusively for target loads, however, Trail Boss is a fast burning pistol powder and creates high pressures and slow velocities. In a rifle, 6.4gr (max recommended) of the stuff barely produces 1,000fps and down around 700 in revolvers....but very accurate...even out to nearly 300 yards in a 24" rifle.

My recent tests of Original 40gr of black powder cartridge loads in original unheadstamped cases, compressed nearly 1/4" as the originals were, (40gr Swiss FFg by weight), produced 1,373fps nearly 14,000psi, estimated 16,550cup from a 20" .429" testing barrel. That particular batch of Swiss weighted 40gr weight by 40gr volume. Most BP's do not. 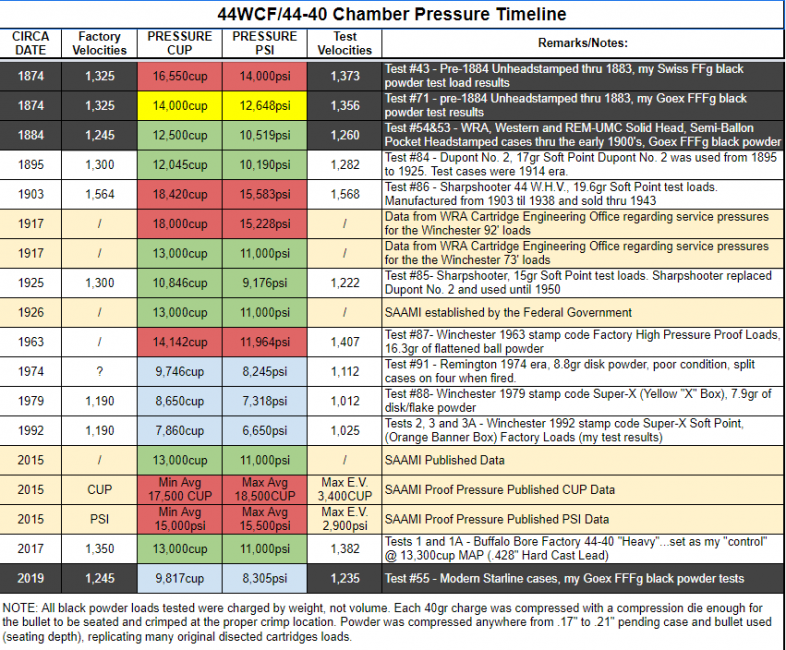 Loaded some .430cal 200gn RNFP (instead of the original .427 cal) and gained a bit of velocity. This revolver is definitely a new production .430 barrel.

Still accurate as heck and super soft shooting. Loving the 44-40.

In the corn and beans

I use liquid gold leaf on the the back of the blade of my revolvers. Nice article also.

Really good article. I have one of their badboy 10mm and it's a nice little gun. One thing is for sure uberti makes some nice firearms.